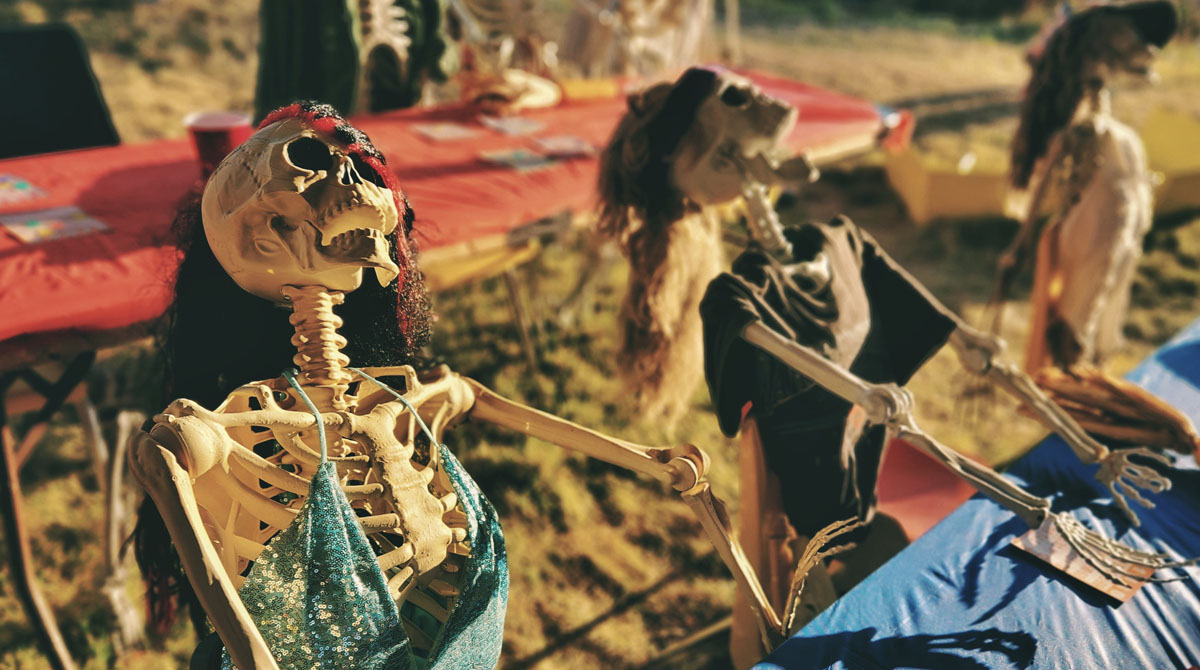 The general mood of spooky season for me this year was malaise and ennui. Each year it gets increasingly more difficult to get into the Halloween spirit when I spend the entire year knee deep in ghost stories and monster encounters while surrounded by real skulls and creepy antiques here in Mental Shed HQ.

Still, it wasn’t a total loss.

After years of trying to convince others to host/narrate Youtube content for Cult of Weird and Wisconsin Frights, I decided the only way to get it done was to ruin the mediocre media empire I’ve built over the last 20+ years by becoming the voice and face of my own brands.

One of my favorite pastimes is luring unsuspecting passengers into my car and taking them on strange trips into the wild weird yonder of Wisconsin. I’m surrounded by boundless Wisconsin weirdness, so why not start creating some travel videos in which I virtually whisk my unwitting audience away into the dark corners of history and legend?

I planned to kick off Halloween with a drive into Houdini country (Appleton, Wisconsin, where Erik Weisz lived—and nearly died—as a child) to visit a notorious bleeding grave and other curious historical landmarks. However, I ended up celebrating the beginning of fall in a more traditionally horrific sort of way: Kidney stones.

After a pain-filled, sleepless week of wishing for a quick death, I was feeling a bit better and opted to shoot something closer to home. So I grabbed my kids and took an impromptu drive to one of my favorite local haunts: Glenbeulah Cemetery. 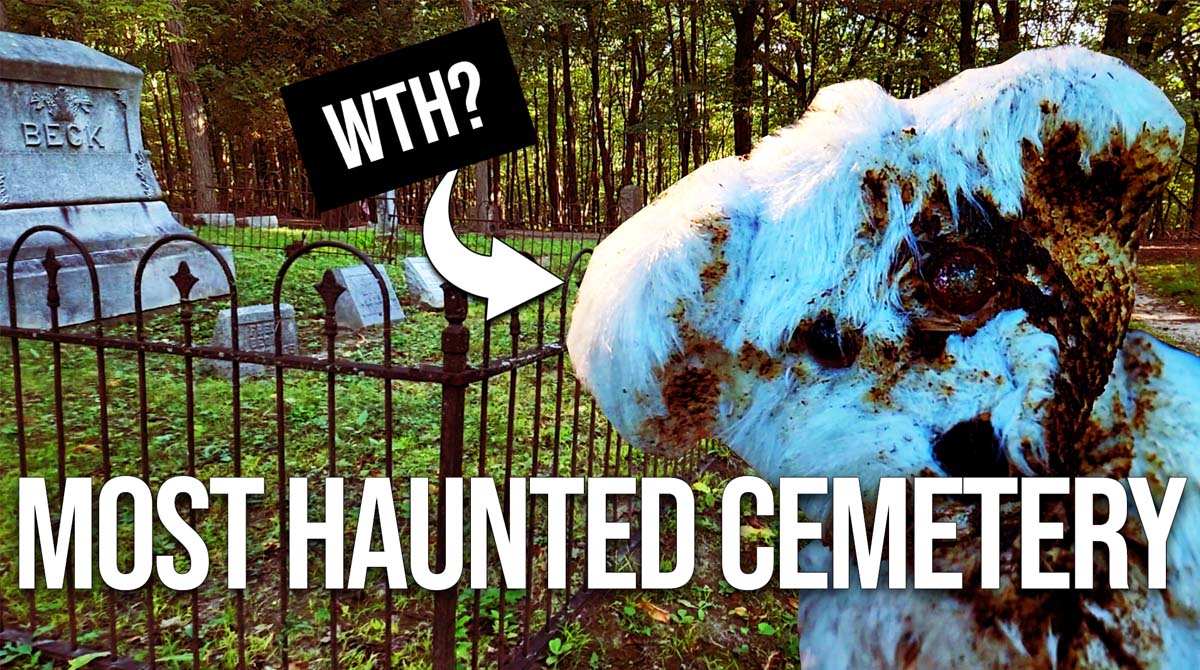 We did eventually film the Appleton trip, which included stops at a historic asylum cemetery and the site of a senator’s exorcism. But the brakes went out on my car—while my daughter was driving—and I had to drive two hours home on the dark back roads with no brakes.

So I had the brakes fixed just so I could drive it to a dealership and trade it in out of spite.

When we returned to Appleton later for the mall, I had no idea until afterwards when I was researching Appleton content on Tiktok that we were in the presence of a notorious Bath & Body Works which has become a pilgrimage site for Wisconsinites. 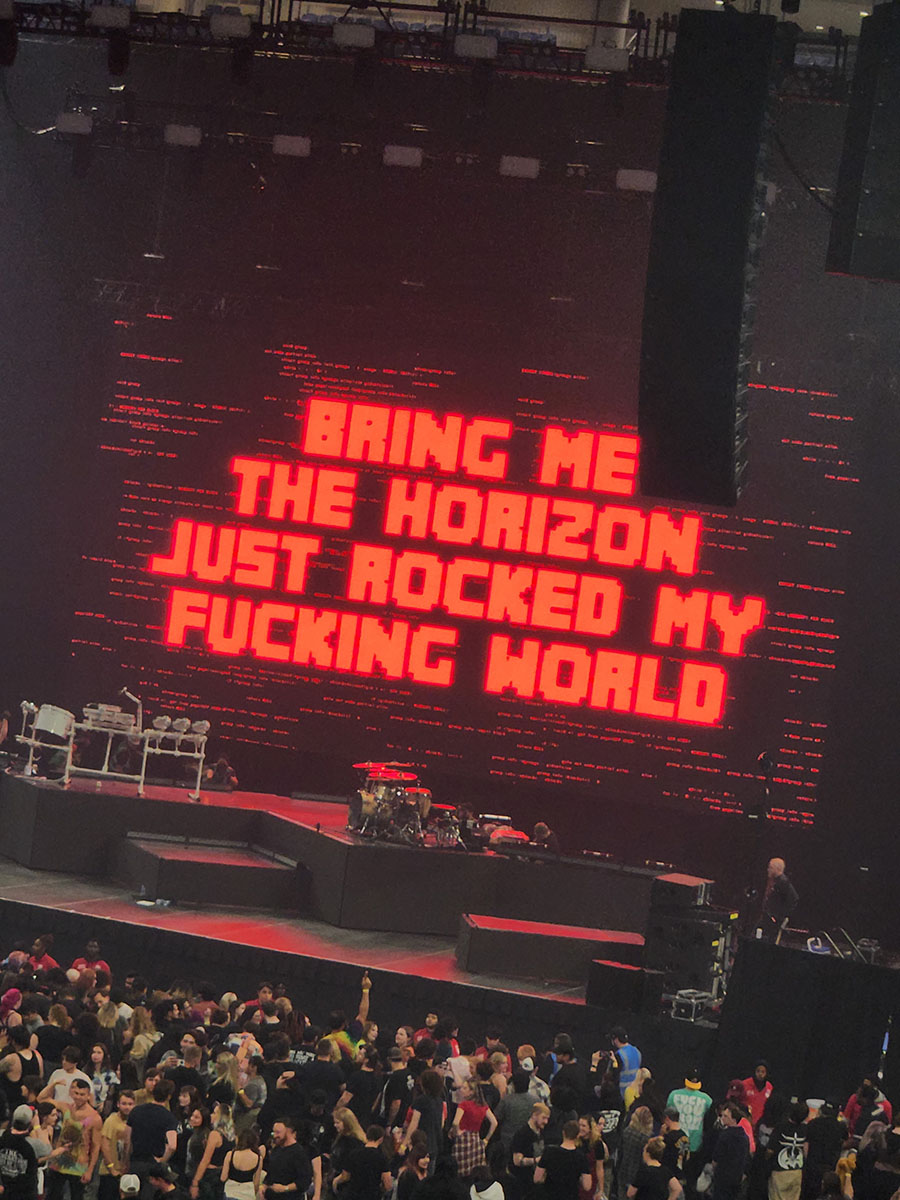 Two weeks later we took a trip to Chicago to see Bring Me the Horizon (with openers Grandson—my son’s favorite—Knocked Loose, and Siiickbrain) and spent the next day being tourists in the Windy City. We visited the Bean, and then my daughter asked if we could go find the Gallagher house from the TV series Shameless. That took us into a curious neighborhood of fascinating architecture and an abandoned, overgrown overpass now being used for farming. 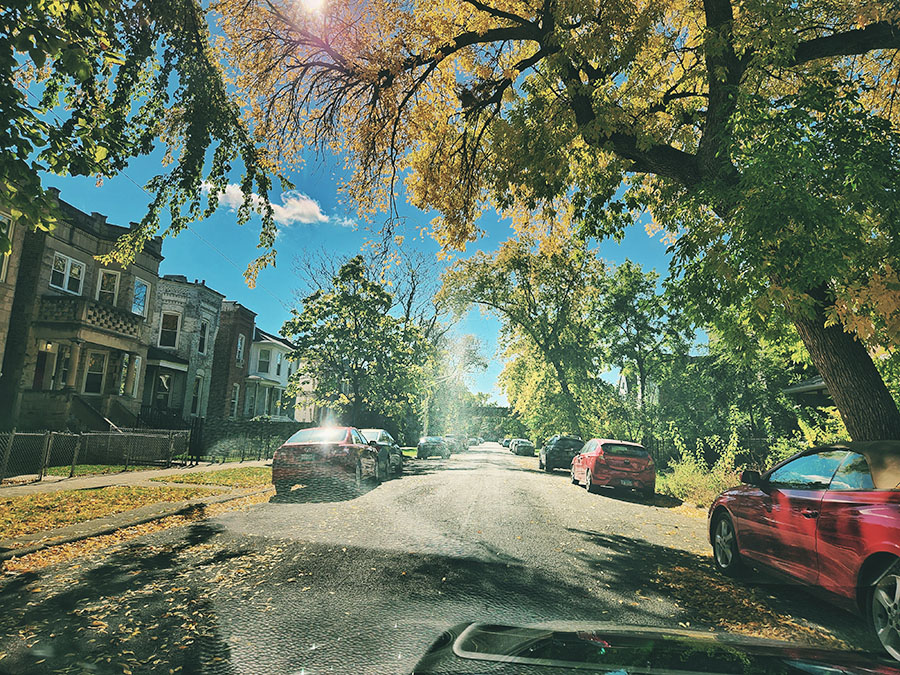 Neighborhood near the Gallagher House 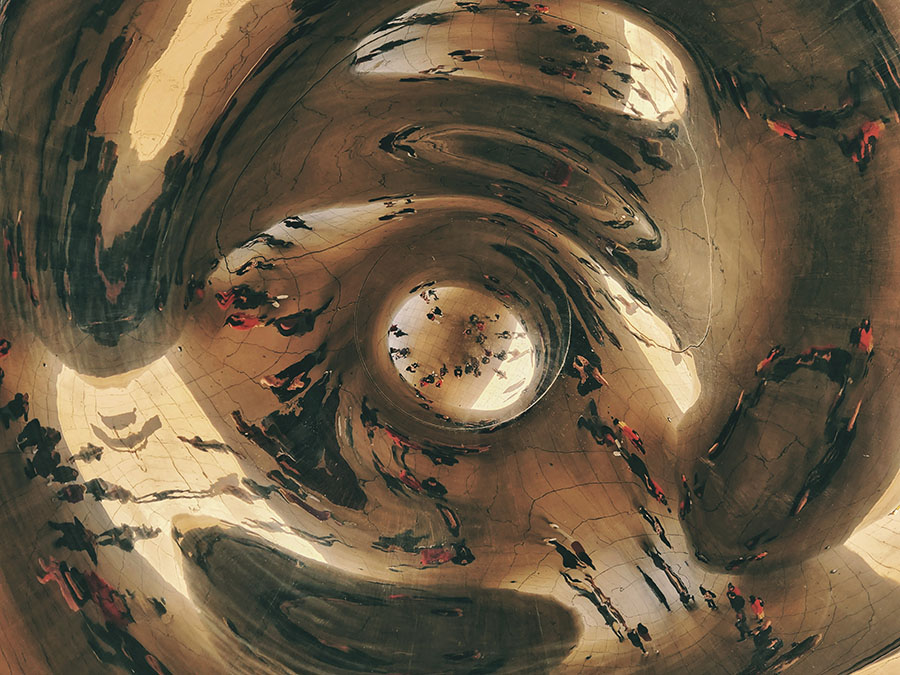 The view directly under the bean, which purportedly makes a lot of people sick

On the way home, we stopped in Kenosha to find the grave of the last man executed in Wisconsin. 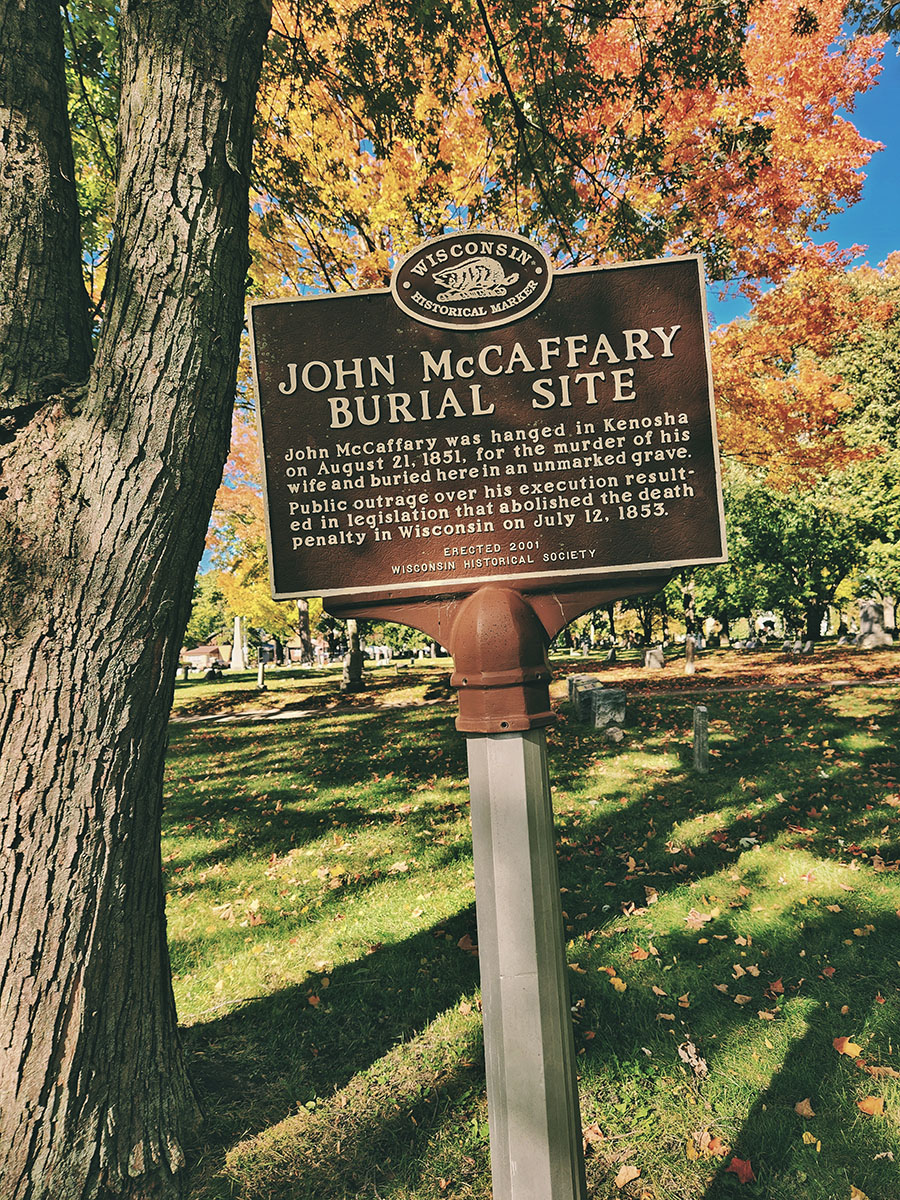 We also made it out to another nearby location known as Holy Hill, a basilica on a hill overlooking the mysterious Kettle Moraine where miracles have been said to take place since the mid-1850s when a monk sought refuge there after murdering his former lover in a jealous rage. 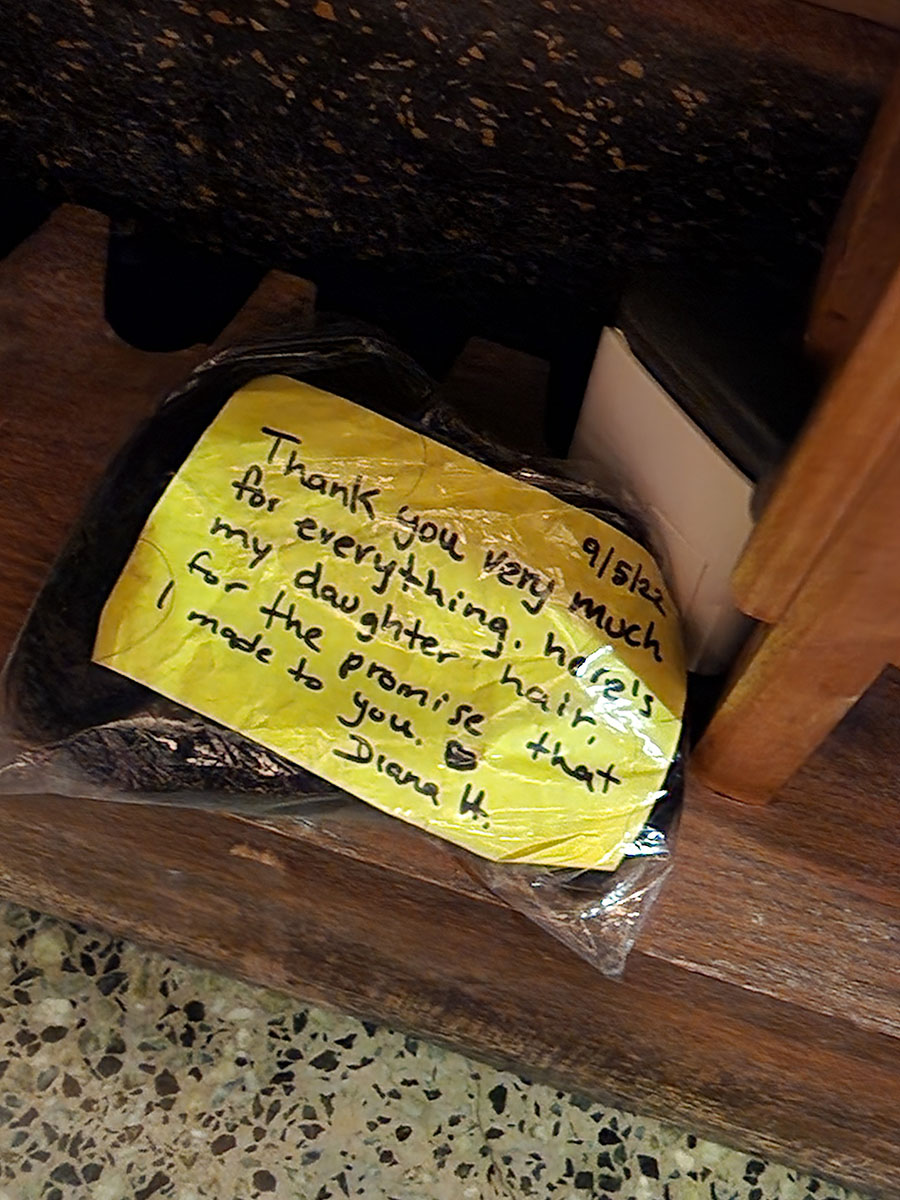 Visitors leave behind crutches, eyeglasses, and…other things…as a testament to the healing miracles at Holy Hill

It’s also the home of an exact replica of the Shroud of Turin, for some reason.

On the way home home we stopped nearby to visit the annual Holy Hill Skeletons display:

I haven’t had much time to read for pleasure lately, it’s usually just research. BUT I did pick up the new Miss Peregrine book by Ransom Riggs. I spent years reading and reading those books to my kids, but now that they’re too old for bedtime stories, I still can’t resist.

I also enjoyed the new Mrs. Friedly story by Cullen Bunn. I’ve been a fan of his work ever since I discovered Countless Haints—now Harrow County—by chance on his website a few years back (while researching haint blue folklore for Cult of Weird) and Mrs. Friedly has become a Halloween staple for my son and I.

Screenwriter Ian A. Stuart, who wrote The Pit (filmed in Wisconsin) said, “The traditional structure of a horror story isn’t the novel, it’s the short story that begins very realistically, introduces an element of the fantastic, and then has to wrap up relatively quickly. But the wrap-up is in the last phrase, the last sentence, even the last word, where the story really gives you a jolt.”

Cullen’s Mrs. Friedly stories are particularly great at that, but the jolt in this year’s story was so simple and expertly crafted that the true horror of it’s final moments sneek up and give you that jolt a beat or two after you’ve read the last line. 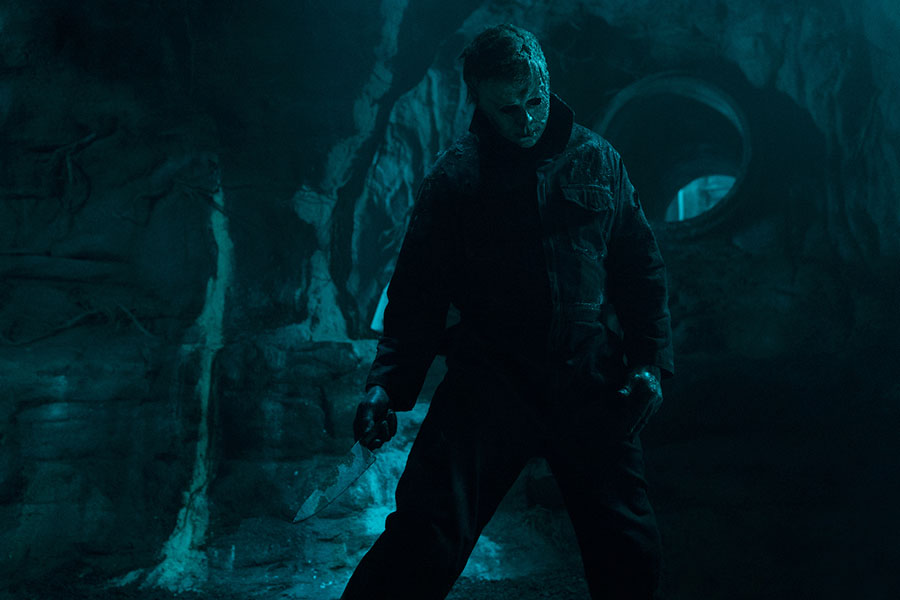 This film didn’t remotely make sense as a sequel to the previous installment. Everything was off. But I didn’t hate it. Felt like a genuine 80s slasher sequel that goes off the rails into WTF territory. Oh, and that opening scene with the kid and the babysitter…holy shit. 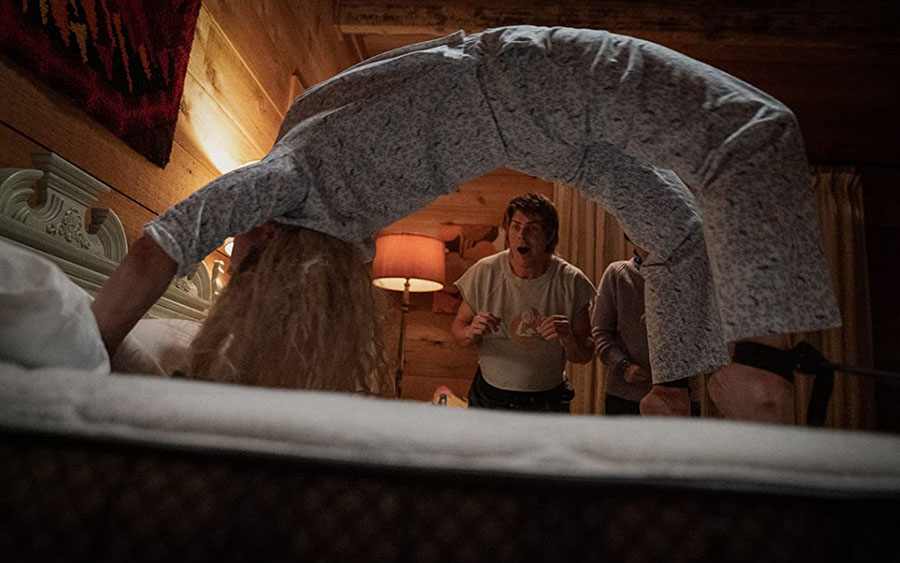 Grady Hendrix popped up on my radar with the release of Paperbacks From Hell, and he has since become my favorite author whose novels I haven’t even read yet. I include his latest releases on the Fall Reading List each year. So I was excited for the Amazon adaptation of My Best Friend’s Exorcism. It did not disappoint. As someone who was traumatized by Satanic panic as a child (and is still being bombarded almost daily with my mother’s QAnon obsession in recent years) I feel a certain catharsis in the way Hendrix handles the subject matter. 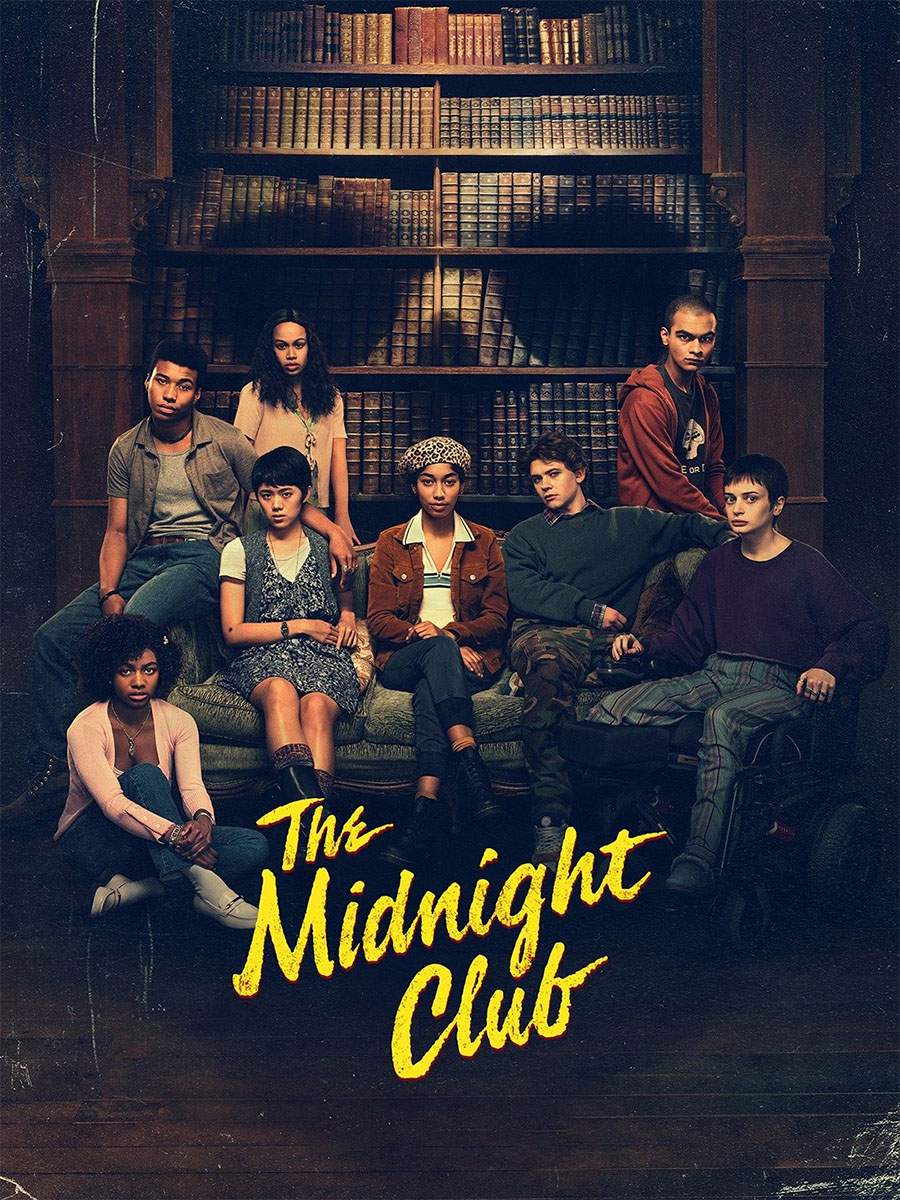 I love Mike Flanagan’s work (Midnight Mass, holy hell) but I went into this expecting some YA Nickelodeon horror. It was NOT that. Turns out it was an incredible series filled with horror, despair and mystery. At first, I was put off that so much focus was placed on the kids’ fictional stories. One of my biggest pet peeves is watching things that aren’t really happening in the world of the story, like dream sequences, or all those episodes of Star Trek when everything is wrapped up neatly and none of it actually happened or had consequence by the time the credits roll. Real stakes or GTFO. That’s just bad storytelling.

As The Midnight Club unfolded, however, those stories became increasingly more important as they were telling us so much about what the kids had gone through, and what they were feeling in the face of their irreversible death sentences. Brilliant. 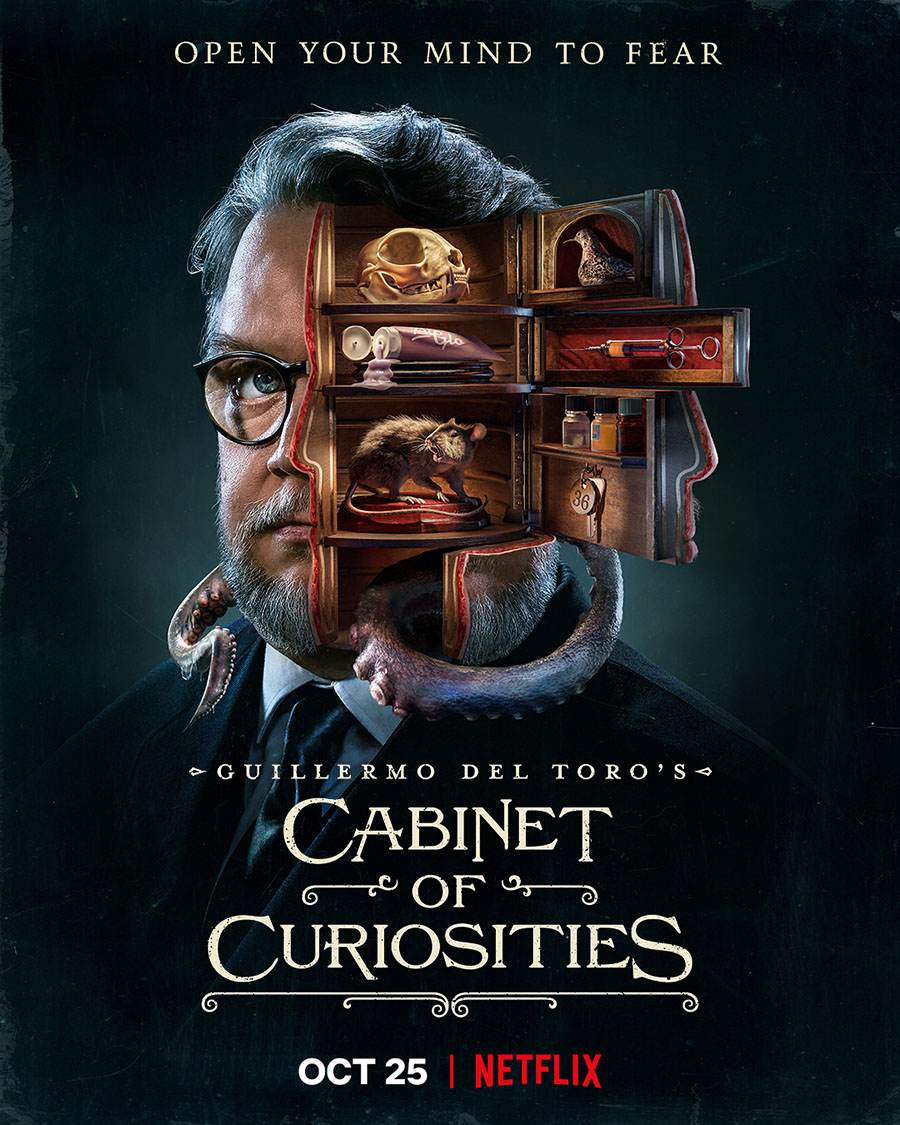 I love short horror stories. They have the freedom to be weird and experimental, and explore absurd ideas in ways that the novel cannot. That love extends to horror anthologies, as it’s essentially the same format but on film. Often, a story is better off short, as drawing it out takes away the bite. That’s probably why the latest season of American Horror Stories is surprisingly watchable compared to most of what came before it.

Naturally, a Guillermo Del Toro-produced anthology series is bound to be great.

What really makes this series stand out to me is that each episode felt literary in that the stories retained that experimental absurdity to some extent. Even the weakest episodes were great for that. No complaints here. With one minor exception, I suppose, in that I was expecting a particular gut punch twist at the end of the final episode, The Murmuring, which admittedly would have ruined the unexpectedly tender, heartfelt ending…but would have been a glorious moment of grim horror.

I have a file where I’ve been jotting down bits of story ideas for the last 10 years, making notes, slowly fleshing them out. I have an entry for murmuration, because I felt an inherent mystery and horror in it, but hadn’t flesh out exactly what it was yet. Now I know.

Ironically, the episodes of Cabinet of Curiosities based on works by H.P. Lovecraft felt the least Lovecraftian of all the stories. 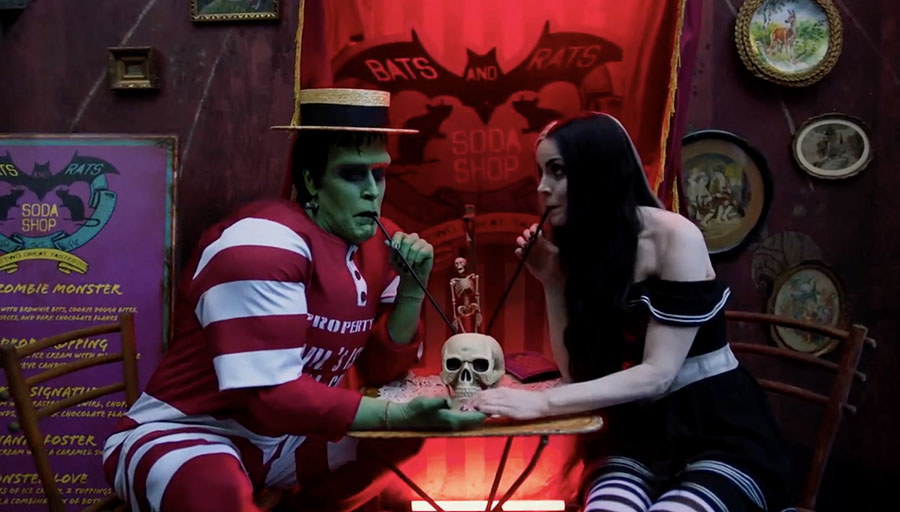 It’s hard to find things to say about this one. I liked the bad makeup and rubber masks. The cinematography and color grading are good, I guess, if you can look past the obnoxious digital noise applied over the top of every scene to give it a faux film look. Didn’t look great on my 65-inch 4K TV. 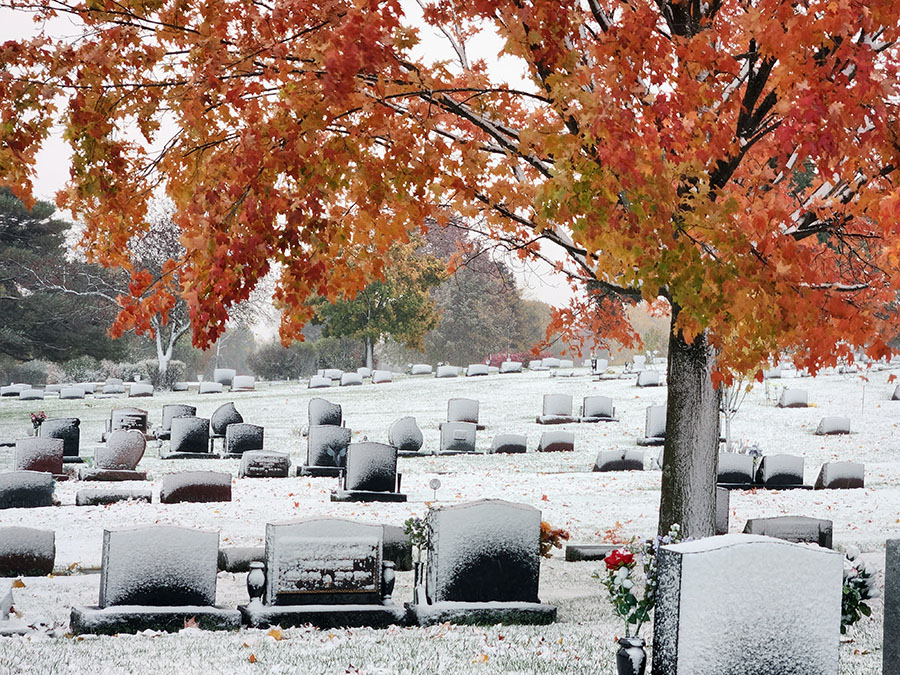 In other news, I also managed to get in approximately one hour of video games in October, which consisted of fumbling through Luigi’s Mansion 3 and Bioshock 2 because it’s been so long since I had time to play them. By the time I remembered the controls and what was going on, I was bored and wandered off to do other things.

I always feel a particular emptiness when Halloween is over, even when I wasn’t really feeling it that season, but then, toward the end of November, the doom and gloom of Wisconsin winter begins to settle in and my head fills with gothic horror. Even when I was young, scrawling (probably terrible) stories across innumerable piles of notebooks, I was always consumed with the urge to write gloomy gothic horror tales of rotting castles and cursed tomes around Thanksgiving when the land turns brown and dead. 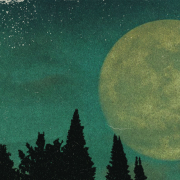 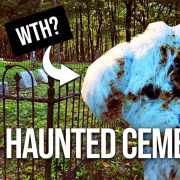 VIDEO: Most Haunted Place in Wisconsin